States of the air out there

This is one of the views available from the top of Mount Kaukau. It’s not my favourite view from here, but it’s still quite good.

Panoramically, Newlands is mid-way to the foreground on the left. Lower Hutt is behind it, and identifiable here because it’s on fire. Panning across the harbour is Matiu Somes Island, one of our predator free scientific and historic reserves. The Kaukau transmitter, without which many of us could not experience the convenience of 24-hour shopping broadcasts directly into our homes, hovers above suburbs like Ngaio and Khandallah. Neither is visible here.

Further along is Wellington’s CBD. The Tinakori Hill is in the foreground, with part of the town belt along the top and suburbs like Wadestown and Wilton on this side of it. Wadestown, as I understand things, is one of many suburbs which had its street grid drawn up on a flat piece of paper in merry old England of the 1800s. This shows in how amusing it can be to walk through. Beyond the end of this photo would be Karori, including deepest darkest Karori, but I didn’t swing the camera that far. 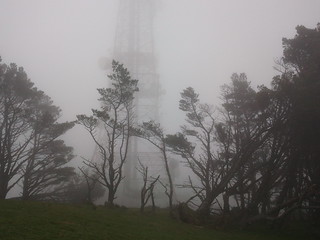 Sometimes the scene from the top of Mount Kaukau, this time seen from the other side, will look similar to this. From not far away there will be a faint outline of the transmitter, if even that, surrounded by its ever-diminishing orchestra of pine trees which become fewer and more bent-over after every storm. It’s also not my favourite view from here, but it’s still quite good.

Fewer people visit the top at these times, but even last Saturday with rain equal to some of the heaviest I’ve experienced anywhere, I met a sizeable handful of drowning people. They might have been up for a run, being walked by their dogs, or simply out walking themselves. After a few occasions, you start to pick out familiar faces.

Mount Kaukau is also one of the places where the MetService measures wind speed. The peak is exposed to the edge of all the air being channeled through the Cook Straight. From time to time we’ll see exclamations like these.

The Met Service measures the wind from right at the very top of the transmitter, and its facilities were originally installed to provide wind information for aircraft at an elevation of 2000 feet. This doesn’t seem to prevent the measurements sometimes being used to label Wellington in popular media as a very windy place, even if nobody actually lives on the top floor of the Mount Kaukau transmitter.

From the ground, in my own subjective experience, the wind often seems to be stronger lower down the ranges on the sides, especially parts of the Skyline Walkway to the south and towards Johnsonville in the north, than its strength at the ground where the trig station stands.

Lately, this exposure to the wind has also played into a hobby of mine. I’ve never been completely sure about the exact strength of wind compared with experience. That’s to say that it occurred I could be standing in a breeze and not know how strong it was in any objective way. I know that a forecast of 80km/h gusting wind on the tops of the Tararua or Ruahine Range means “a strong wind”, but I wasn’t able to picture if wind of that strength would definitely cripple a plan or not. 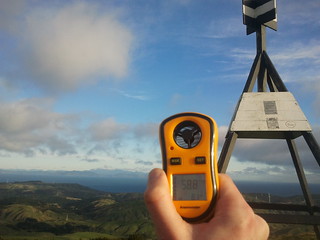 Thinking about this, I’ve bought myself a portable anemometer gizmo (to measure wind speed), which I found online for about $30. If I hold it in front of me, it spins and a digital display then gives me a measured wind speed. It’s nothing fancy, and at best I know that it’s only as reliable as the accuracy with which I can hold it, unobscured, directly into the wind whilst standing still. It’s also only rated accurate up to wind of about 103 km/h, but I hope that’s enough to give me some good ideas.

It’s now been up Kaukau a few times, and it’s letting me compare the wind I’m experiencing with something which resembles an actual objective measurement. Even if inaccurate, it lets me compare my own measurements with what the Met Service or weather stations have been reporting with superior equipment. (I’ve yet to do this properly.)

So far, the strongest gust of wind that I’ve stood in on Kaukau, at least during a time when I’ve had this thing available with working batteries, has been around 105 km/h… so sitting on the claimed limits of accuracy for this device. I now know that whilst uncomfortable, that’s a wind strength which I can probably tolerate in small doses.

At 445 metres, Mt Kaukau doesn’t rate on the NZ alpine scale. In genuine alpine situations there are clearly many other important factors. Wind chill, ice and rain, and being in risky locations when blown over. Even here, I’ve turned back in wind of only moderate strength when I began to get pelted by icy 1cm hailstones. I like the idea of being able to measure and compare things with objective numbers, though. In my recent trip report of walking the Southern Main Range, I stated an estimated 40-50 km/h wind from the south-east. I didn’t objectively measure that wind on the day and it may not be exact, but thanks this new hobby I’ve become more confident to estimate that type of wind strength based on what I’m experiencing at the time, instead of just making up numbers. 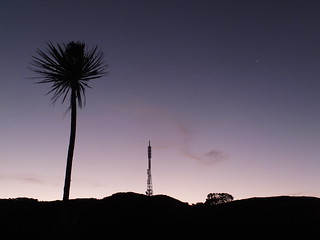 Using Kaukau to learn more about wind speeds has been great, but I think the time when I most appreciate it is when there’s no wind at all, with calm and still weather. At this time it’s helpful to realise that Mount Kaukau has two summits. There’s a fake summit, with a viewing platform, and signs, and track junctions. It’s where most people aim for. By most accounts, on a clear enough day it has a fab panoramic scene over the city and harbour of Wellington and surrounds.

For an extra two minutes of effort, though, the actual summit, complete with trig station, is completely obscured on the far side of the transmitter from where the viewing platform is, and so is what’s behind it.

With Wellington’s geographic layout being full of pockets of population, I suspect that many poeple don’t realise just how close they are to the western coast of the North Island. Maybe some don’t even realise how easy it is to look out the other side, whether it’s by walking up Mt Kaukau or by climbing up to the ridge-line from any of the western suburbs which reside underneath the Skyline Walkway between Kaukau and Maraka Peak. If you’re in the area with calm and still air, it’s often worth making the effort and you might be fortunate enough to see scenes like this. 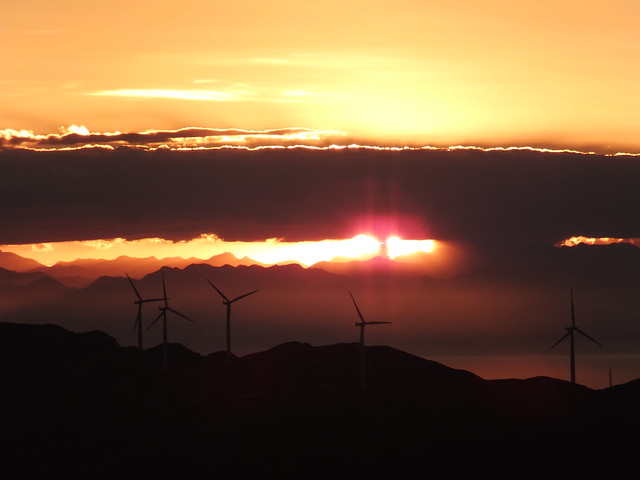 These are my personal favourite scenes from the summit, in ideal conditions.

From the actual summit it’s possible to gaze over the rural setting onto the Cook Straight, towards the Seaward Kaikouras and the Marlborough Sounds of the South Island. The foreground is becoming a place for wind farms, starting with West Wind and now Mill Creek. Northwards is Mount Taranaki if conditions permit. You’d not realise you’re so close to an urban area, and suddenly it makes visual sense why Mount Kaukau gets so windy at times. This is the same Cook Straight which channels gales from Antarctica. For the amount of air that’s pushing through the gap, the land on the far side of the straight is so close. 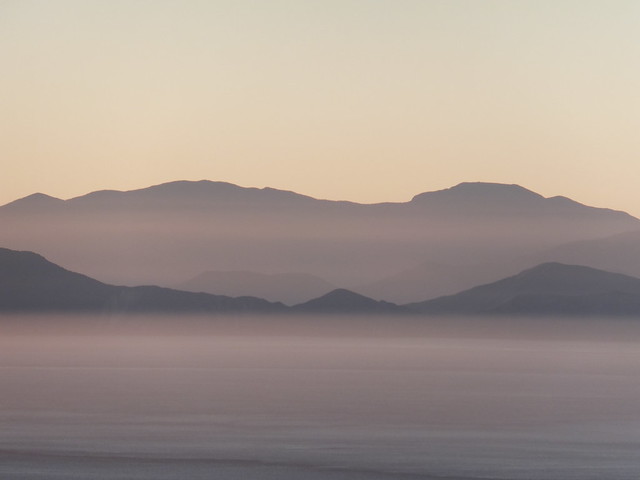 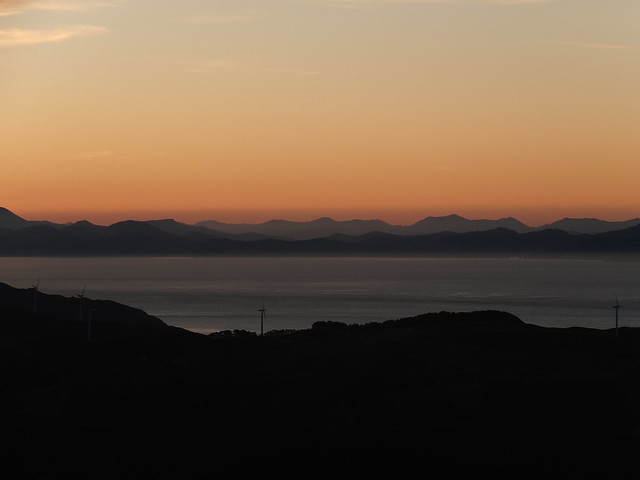 I reckon it’s worth it. Just take a torch so you can get down again after watching the sun set. Here’s Mt Tapuae-o-Uenuku. 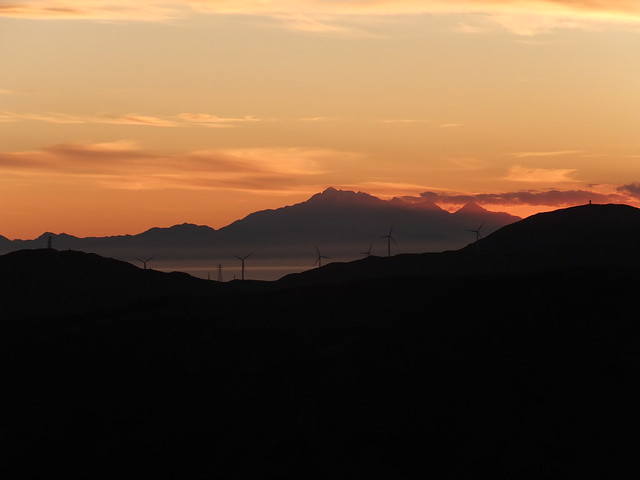 This entry was posted in musing and tagged kaukau, musing, skyline walkway, wellington, wind. Bookmark the permalink.
Logging In...