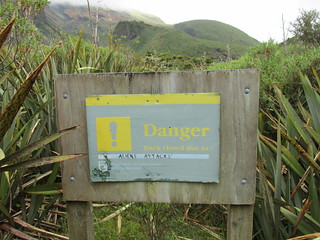 The two ends of what
used to be the Pyramid Route. 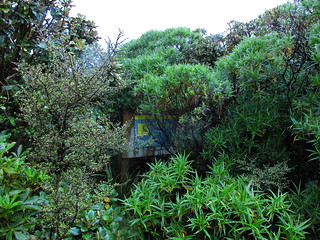 In the past I’ve dropped a few references to the various tracks around Egmont National Park which have been ‘closed’ (in official terms) in relatively recent times. Reasons have generally ranged between erosion and lack of maintenance.

Here are a couple of recently-posted trip reports (not mine) on zoneblue.org, covering a couple of them.

I should add that it’s also a slightly contentious point to talk about this. DOC in Taranaki has had issues with people unofficially retaining old tracks.

The Pyramid Route: The high track above Pyramid Stream, between Holly Hut and Kahui Hut, has suffered substantial damage in recent years due to erosion around several of the waterways which it crosses. Eventually, DOC decided to stop officially maintaining it, although the route still appears on some older maps.

The Kiri Track: Contrary to the sketchy information shown on modern LINZ maps, it’s very possible to get to Pouakai Peak via Kiri Peak, from Carrington Road. One of these tracks is the Kiri Track, but there’s really a network of multiple tracks up that side thanks to maintenance from a combination of the New Plymouth Tramping Club and some goat hunters. I assume it’s okay to note this association, given the NPTC’s President reported its track maintenance efforts to Radio NZ a few months ago.

This entry was posted in musing and tagged department of conservation, egmont national park, musing, navigation. Bookmark the permalink.
Logging In...