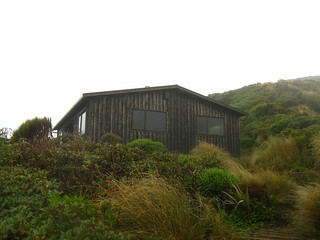 Meanwhile, police also rescued two people who had got lost on the Pouakai track on Friday.

The pair were reached at Pouakai Hut on Friday afternoon, and were walked out on Friday evening, a police spokeswoman said.

Search and rescue staff have headed up to Pouakai hut to rescue two trampers that were “cold and wet and a little bit lost”.

A police spokeswoman said they had called emergency services after becoming stuck at the hut on the top of the Pouakai Ranges in Egmont National Park near Mt Taranaki.

The spokeswoman said staff were preparing to head up to the pair at 1.30 on Thursday afternoon and would walk them out of the park.

The pair had food and water, and were not in immediate danger, she said.

Here is Pouakai Hut on a map.

I’m not a Taranaki local but I’m there frequently enough that I’m not a complete stranger to Pouakai Hut or the Pouakai Range. It’s a 1.5 to 2 hour walk up, for the reasonably fit, from the end of Mangorei Road. Most of that walk is under trees, and virtually all of it is artificially stepped and boardwalked.

When I read about the first event I was surprised that someone could reach Pouakai Hut and still require help. Maybe it was just bad timing when asking for help, or being exhausted having somehow become lost amongst the heavily artificially tracked Pouakai Range. Less than a month later, however, it’s apparently happened again. Two people found their way to Pouakai Hut and, somehow, didn’t feel capable of getting themselves down.

I was most recently there on 6th October. The weather was less than optimal, and I met a trio of people on their way down who didn’t strike me as being very skilled. I later noticed they’d not written in the hut book after staying the night. I was also reminded that this is a hut where it can sometimes sound as if it’s worse outside than it actually is, and as is often the case it’s easy to start feeling cold if you’re just sitting inside without heating and not moving much.

Having left the hut, however, it’s a matter of crossing a few hundred metres below a small saddle. The route is plainly obvious. It’s heading down and getting warmer the entire time, and quickly goes under sheltered trees. To me, and being so used to wearing tramping boots, it’s seemed that the greatest hazard is tripping and slipping on the artificially constructed surfaces.

Are these incidents at Pouakai Hut normal? Is it just a couple of coincidentally timed incidents?

This entry was posted in musing and tagged egmont national park, musing, search and rescue. Bookmark the permalink.
Logging In...