Today’s news about one of the two main support cables of the Hopuruahine Bridge (on a map [1]) giving way, along the Lake Waikaremoana Great Walk (radio NZ [2], Stuff [3], NZ Herald [4]) should be seen as very concerning. The consequence was that four tourists were dropped eight metres into two metres of water below. With a different set of circumstances (flooded river, shallower or no water, victims being incapacitated on the way down or otherwise unable to swim), the outcome could easily have been far more serious than four people plunging into a river and clambering out with their lives intact. Especially since the Cave Creek accident of 1995, which I wrote about in detail here [5], this is the type of incident which should never happen if a bridge has been engineered, built and inspected according to the standards by which DOC holds itself under New Zealand law, and yet it’s happened anyway. 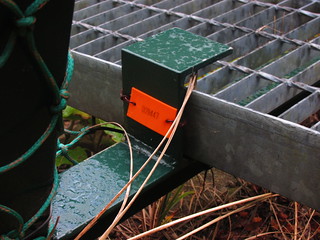 [6]
An asset number tag on the bridge over
the Waingawa River in the Tararuas,
outside Cow Creek Hut.
(Not the bridge in question.) 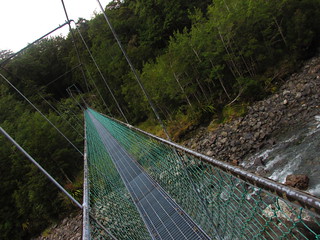 Although the area is jointly managed by DOC and the Te Urewera Board, it’s likely DOC with its expertise and systems which continues to be most directly responsible for monitoring and maintenance of this bridge, as would have been the case until recently anyway. If you look closely at bridges, huts, signs, and nearly anything else significant and artificial that’s administered by DOC, you’ll find a tag with a number. Here’s a photographed example of the tag I passed on a bridge, just last Saturday.

The number on the tag maps back to the Department of Conservation’s asset tracking system. The system is used to keep track of all of DOC’s structures. It assists with generation of inspection and maintenance programmes for qualified staff to check and verify that all of these structures are up-to-standard, and to record when this inspection and maintenance has been carried out.

So far, media reports have stated that the bridge in question was most recently inspected in June, three months before this occurred. [Additional: Although Stuff and Radio NZ have both reported the most recent check as having been in June, Mike Slater of DOC stated in a Radio NZ Checkpoint interview [8] that there was an Engineer inspection 18 months ago, a further inspection by a qualified DOC inspector 1 year ago, plus regular observations by DOC staff. The June claim in the Stuff article seems to originate from a statement by the Te Urewera Board which jointly manages the park, but it’s unclear what type of inspection that was.]

It’s too early to say what the cause is for this to have happened, and whether we should be concerned about any other structures. DOC has already sent a senior engineer to the site to investigate more completely. Possibilities, I suppose, are (a) that an inspector made a mistake, (b) that whatever inspection plan which exists for the bridge was flawed for some reason, (c) that the design of the bridge was fundamentally flawed from the start, (d) that the bridge wasn’t built to its design, or (e) that some kind of vandalism or unforseen serious damage has occurred since the most recent inspection.

A further suggestion I’ve already seen posted in some places is that those involved were using the bridge inappropriately. Maybe there were too many people on the bridge at a time (there weren’t—only four people on a bridge signposted for a max 10 people), or maybe they were jumping up and down. Even if these possibilities were true, they’re not enough in my view to place any blame on the victims, unless they were standing in the middle and hacking at the cable with an axe.

At the Cave Creek Commission of Inquiry, both DoC staff and qualified engineers agreed that any structure should always be built to withstand as many people as might reasonably crowd onto it, and to withstand what they might reasonably be expected to do on it. 10 years after that accident it emerged that the Cave Creek victims had been “shaking the platform hard [9]” when it collapsed, but it’s unlikely that knowledge of this would have made any difference to the outcome because it was reasonable that such a thing might happen, and the platform should have been built to withstand that possibility in the first place.

The outcome of the initial investigation will hopefully determine if there are any notable risks for any other structures, and help to guide a reaction accordingly. I’m not personally concerned about stepping onto a DOC bridge right now. Statistically they have a very good track record for safety, and that could be put down to the standards of construction, inspection and maintenance that have been in place since 1995. Last Saturday, I was quite happily running back and forth over the above-photographed swing bridge in the Tararuas, and joking to others about it having a reliable maintenance plan because of its asset number tag. Clearly though, it’s important to establish exactly what happened in this incident, so that whatever appropriate measures can be taken to prevent anything similar from happening again.