I’ve not previously written here about the Ruataniwha Dam situation. Today’s decision in the Supreme Court, however, is highly significant. It’s not just significant for the Ruahine Range, but for the future of all Conservation Parks and Forest Parks in New Zealand. 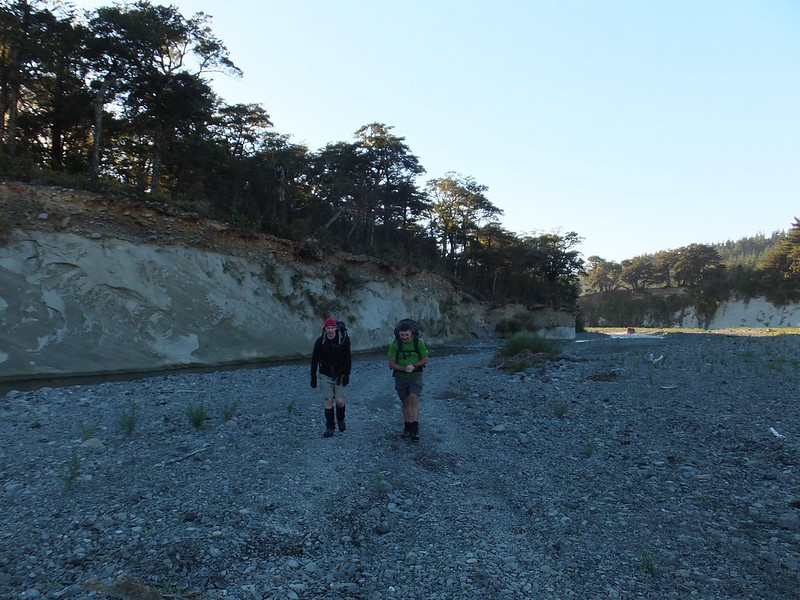 Gareth and Craig walk up part of the Makaroro River that’s proposed for flooding,
29th March 2013.

As background, Hawke’s Bay Regional Investment Company (HBRIC, owned by Hawke’s Bay Regional Council) wanted to build an irrigation dam to support more intensive farming in the district. The only practical plan included flooding 22 hectares of Ruahine Forest Park, next to the Makaroro River. For this to happen, the Minister of Conservation and DOC arranged to swap the land in question for some alternative land that could be added to Ruahine Forest Park.

The decision agitated many people for many reasons, but the most relevant legal point is that the Conservation Act only allows Stewardship Land to be traded away. It doesn’t allow for the trading of Specially Protected Areas. To circumvent this, DOC first down-graded the status of the land to Stewardship Land so it could be lawfully traded, but the law’s unclear about whether it’s legal to downgrade Specially Protected Areas for this reason.

Forest and Bird challenged the decision, arguing that DOC had no lawful ability to downgrade the status of the land because to do so, it’d need to show that it didn’t hold the values for which it’d been given that status. DOC argued, in so much legal jargon, that because Specially Protected Areas were being managed in the same way as Stewardship Land, it was effectively the same as Stewardship Land.

On the face of it, this case was about an irrigation dam in Hawke’s Bay. Many people who support Forest and Bird’s case simply didn’t want that dam for a variety of reasons. Much of the coverage has been about water quality and farming, whether the proposed irrigation dam is even financially viable, and local Hawke’s Bay issues.

More fundamentally and perhaps more significantly, though, this case has been about the protection status of Specially Protected Areas throughout all of New Zealand. The absurdity of the whole thing has been that the Minister of Conservation and the Department of Conservation, both charged with a mandate of protecting these areas of land, have been arguing in court that Conservation Parks and Forest Parks status affords areas of land no effective greater protection than land that’s never been categorised for special protection.

Immediately after the Supreme Court Decision, the Prime Minister was on the radio claiming that the government would now investigate changing the law to enable these types of land swaps, of Specially Protected Areas, to proceed. Today the Minister of Conservation put out a similar press release.

Quotes such as the following, which similarly came from both the Prime Minister and the Minister of Conservation, suggest that the political branch of the government is already starting to focus on a narrative of the whole situation to justify why the law should be changed:

“For the past 30 years we all believed that the legislation allowed the swap of a low value piece of conservation land for a piece of land with higher conservation values.”
– Maggie Barry, Minister of Conservation.

Exactly what law changes might be proposed will need to be considered on their merits when they’re proposed, but to me it seems the above statement is complete rubbish.

I’ve not knowingly met anyone who thought that the legislation allowed the swapping of Specially Protected Areas in such as trivial way as what DOC attempted. The attempt came as a surprise even to people well versed in conservation law.

The Conservation Act is fairly clear that only uncategorised Stewardship Land can be traded for alternative land, and perhaps there was a naive presumption by myself and others that “specially protected area” couldn’t be gazetted back to Stewardship Land on a whim, merely because their protection had become inconvenient for someone. After all, if it’s so easy to do that then what’s the point of even having a special designation of protection?

If that is not enough, though, the above words are also misleading. While the Conservation Act requires benefit for the Conservation Estate in a trade, the process can easily result in a net conservation loss because the law ignores whatever protection already existed on the land being received. A trade effectively means that high quality Conservation land can have its protection revoked in exchange for land that receives little or no more protection than it already had.

This anomaly was highlighted by the Parliamentary Commissioner for the Environment in a recent report on Stewardship Land. It’s disingenuous for both the PM and Minister of Conservation to be implying that trading is about net conservation benefit, because there have been multiple high profile cases which suggest the opposite, as noted by the PCE.

Today’s Supreme Court decision is important because, rather than being merely about Ruataniwha Dam in the Hawke’s Bay, it’s about whether all Conservation Parks and Forest Parks throughout New Zealand have genuine extra protection. I’m personally relieved that the protection has been upheld, but I’m not inspired with confidence when I see how the political arm of the government is reacting to the outcome.

For further reading, Federated Mountain Clubs has posted a nifty summary of today’s decision, and why it matters, on its Wilderlife website.